Mexico City is full of people who make their journeys on two feet: navigating cars, running after buses that don’t stop where they should, risking their lives on the public bicycle system. Looking after all these people are the traffic police, but there is little they can do in a city of feverish drivers who will do anything to arrive at their destination on time.

Just three out of every 10 journeys in Mexico City are made by car, yet for decades the government has favored investment in public works that favor car usage. Combining the biggest concentration of cars, inadequate road infrastructure, and a total lack of road safety culture, it is not surprising that there are more deaths on the city’s streets than on any others in Mexico. 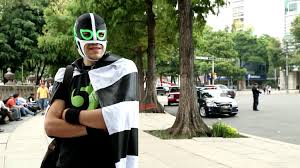 In 2012, a Luchador “superhero” in defense of foot travelers appeared: Peatónito, or Pedestrian Man. Armed with a highway code and an aerosol can to spray zebra crossings where none existed, he twice weekly swoops onto the streets to put the anti-lock brakes on crime, exposing serious and minor traffic violations. 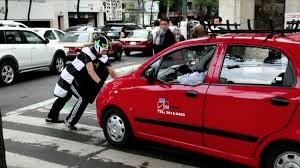 The man behind Peatónito’s mask is Jorge Cáñez, a 29-old political scientist who works for city government. Backed by a network of activists intent making the city more civilized and habitable, together they fight for a safer, more efficient way for people to get around the capital – which has 5.5m vehicles in circulation – on foot. 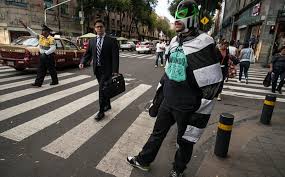 Peatónito can take pride in the victories he and his fellow transport rights activists have achieved. The triumphs are tangible; just this August, Mexico City’s government presented a new set of road traffic regulations with reduced speed limits on primary routes (that is, slower routes) from 70km/h to 50km/h.

The reduced speed limit isn’t a mere whim on the part of the activists; it’s possible to measure how dangerous the streets of the capital are. In Mexico City, 52 accidents in every 1,000 are fatal. In the entire country, the rate is 39 deaths for every 1,000 accidents.

Another battle that has been fought and won is implementation of “Vision Zero”, a series of public policies aimed at eradicating road traffic deaths, backed for years by activists worldwide. Their aims: an ethical focus to ensure human life is prioritized; shared responsibility between those who design the roads and those who use them, and street safety and mechanisms for change. 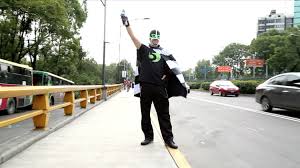 Was it necessary to create a character that resembled something out of a Lucha Libre fight to raise awareness about the risks to Mexico City’s pedestrians? Jorge Peatónito isn’t sure, but he believes creativity is a powerful weapon for activists.

“Lucha Libre is deep-rooted in Mexican life, but the idea [for Peatónito] came to me the day I took a few foreign friends along to see a fight. If we’ve had Superbarrio (another Mexican self-claimed superhero who fought causes on behalf of the city’s lower classes in the 1990s), why can’t we imagine the street as a wrestling ring?” This is how his activism acquired its comedy touch. 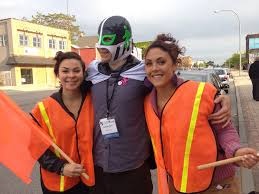 Cáñez finds it rewarding and has no plans to abandon his superhero persona: “I do it all for the love of art, to do something for the city. Financially speaking, Peatónito hasn’t earned me more than the fee for a few talks and a couple of trips. That’s it. The best thing is the satisfaction of communicating a message in a powerful way.”

And Now, For Something Superheroically Related--!
UK's Phenomenal Fixer Of Foot-Powered Transport 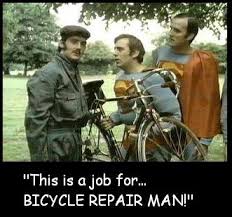