Where We Are And what we are facing.

America has been the site of mass protests since before the Revolution. The right to protest is considered so sacred that it is protected in the First Amendment of the Constitution. There are laws governing where the line between protests and lawbreaking lies. And policing protests is as American as the protests themselves. Protests do not threaten American democracy.

The grave danger to American democracy emanates from the unprecedented fusion between the Democrat Party and corporate America. Political philosopher Angelo Codevilla referred to this unity of forces as a ruling “oligarchy” that is replacing the American Republic.

The emerging “oligarchy” is currently enacting something that can rightly be dubbed, “The Great Purge.” The Great Purge, an event without precedent in American history, isn’t about one side seizing the levers of power for itself. It is about one side denying the other side the right to even vie for power.

The purpose of the Great Purge is to “cancel” the Republican Party and its voters as a legitimate political force and so transform the United States into something approaching a one-party system.

To achieve this goal, Democrats in government and their in corporate and big tech media partners are using their power to repress, silence, ruin and criminalize tens of millions of private citizens for the “crime” of supporting Trump and the Republican Party.

The Big Tech giants’ coordinated cancellation of all of Trump’s social media accounts almost simultaneously was the opening gambit. It was rapidly followed by Congress’s light speed impeachment of Trump for his alleged role in fomenting the violent protest at the Capitol.

Like the social media ban, the impeachment flew through with no debate, no due process, no evidence through the good offices of Democrat lawmakers and their Republican allies who wish to make an example out of Trump.

There is every reason to believe that in the coming months and years, the members of the ruling class will continue to abuse their power to destroy Trump whether by bankrupting him or prosecuting him. They must continue to pursue him. For if he perseveres, then they will have failed.

Since January 6, petitions of lawyers and law students demanding that Senators Cruz and Hawley be disbarred for lawfully challenging the electoral college votes of disputed states have garnered thousands of signatures. Harvard students are demanding the university withdraw the degrees of Trump advisors and political allies.

Regular Americans who participated in the protests – outside and inside the Capitol – are also being purged. Doctors, lawyers, state lawmakers, policemen and others whose only “crime” was being present have lost their jobs after being “outed.”

As bad as things are becoming in the private sector, the smoke signals being sent out from Washington are even more alarming. Since January 6, Democrat lawmakers have been preparing legislation that would apply counter-terror laws passed to fight foreign terror groups abroad to investigating and fighting Americans suspected of membership in “domestic terror groups.”

Aside from Trump and “lawmakers,” Former CIA director John Brennan said the new enemy is comprised of “an unholy alliance of religious extremists, authoritarians, fascists, bigots, racists, nativists and even libertarians.” Former FBI director James Comey made the goal of the purge explicit. “The Republican Party needs to be burned down or changed,” he told the Guardian.

He figures people would be happy to go along with that. “Who would want to be part of an organization that at its core is built on lies and racism and know-nothingism? It’s just not a healthy political organization.”

This isn’t just America’s problem. Thanks to New Hope Party Chairman Gideon Sa’ar, Israel is now importing some of the instigators of the purge. Sa’ar has reportedly hired four founders of the Lincoln Project to run his campaign against Prime Minister Benjamin Netanyahu and the Likud ahead of the March elections.

When Ocasio Cortez said Democrats should make a database of Trump administration officials to prepare a blacklist, she was pilloried as a totalitarian. But when the “former Republicans” from the Lincoln Project said they were compiling such a list, it went over without protest.

And ever since, the Lincoln Project has led the way in blacklisting and cancelling everyone from Trump’s attorneys to hotels and vacation websites that served Trump supporters who came to Washington on January 6. It is now calling for the firing of everyone from a county election board chairwoman in Georgia to Republican House Minority Leader Kevin McCarthy.

For four years, Israelis have gasped at the similarities between the Israeli left’s unrelenting efforts to destroy Prime Minister Netanyahu, in partnership with the media and the legal fraternity, and the efforts of their American counterparts to destroy Donald Trump.

Sa’ar's decision to integrate the instigators of America’s great purge – a purge already endangering the democratic order of the most powerful democracy on earth – into Israel’s political bloodstream bodes ill for its future. And it most certainly tells us something alarming about the direction Sa’ar is interested in taking the country, if his campaign to become the next prime minister succeeds.

Where We Are & What We're Facing - Cinematic Venn Diagram Version 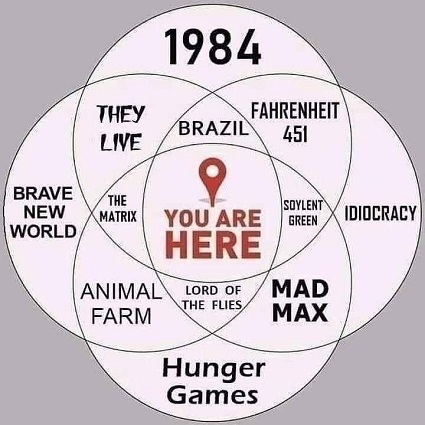