A video was released on Friday in Mandarin Chinese of a phone call request for fake ballots customized by Chinese factory.

The manufacturer is reportedly in Kwangtung, China.

In the video a caller is heard requesting a bulk order of ballots to ship to the United States.

The video is just starting to make the rounds.
Here is the video with the translation.

FYI- Our Mandarin speaker confirmed the translation is accurate.

Yes, No, Yes, No?? Georgia's Raffensperger is having a mental breakdown and still changing State voting rules, every other minute. Of course every time he does, he just looks More guilty........He is Acting Guilty, like a man that has "something" to hide.

Judge Timothy C. Batten, Sr. issued an order on Sunday morning to freeze ALL Dominion voting machines in the state of Georgia.

Via Attorney Linn Wood: “Defendants are ordered to maintain the statue quo & are temporarily enjoined from wiping or resetting any voting machines in the State of Georgia until further order of the Court.”

We're not crazy because we doubt.
IT's crazy.
Top

I would imagine no one would have noticed the "shenanigans", if their pre-programmed, vote,application, Hadn't gone a over the top, Bezerk, kind of like they are. It was doing it on National TV for cry-in-out-loud!

Trump's partner in lies Bill Barr, just announced there is no evidence of election fraud. Hopefully, this will now put an end to all of this nonsense.

What I hear Barr and others saying is, "It's just easier for me"
Top

Five Quick Things: No, You Are Not Crazy
After the way Americans have been censored, gaslighted, and lied to, no one is obligated to accept anyone’s narrative anymore. FULL STORY
There are none so asleep & oblivious to the real world as those who are & would be Woken.

Wonder how much money Ruby got? A lot! Ruby may lose her Liberity, So We The People can keep Ours.
Keep watching what your watching (THE MSM)You will remain clueless. GUARENTEED.


What’s Up, Ruby?… BREAKING: Crooked Operative Filmed Pulling Out Suitcases of Ballots in Georgia IS IDENTIFIED


Earlier today Cristina Laila reported on the explosive video that was revealed during the Georgia ballot counting at the State Farm Arena where crooked Democrats pulled out suitcases full of ballots and began counting those ballots without election monitors in the room.

Trump’s legal team showed a video from the State Farm Arena tabulation center when poll workers were told to leave at 10:25 PM.

A few “workers” stayed behind and were seen pulling suitcases full of ballots out from under tables to be tabulated!

This was the most explosive video of the entire campaign season!

We now have identified one of these criminals who were caught on video counting illegal ballots from a suitcase stashed under a table!
As you can see from the video one woman in a purple top was filmed helping pull out the ballots and then sitting down to count the ballots.
That woman has now been identified.

Local 11 News covered the story from the State Farm Arena that a pipe had burst.
(This later was proven to be complete fraud and an excuse to kick out the GOP election observers!)


One woman in the video is wearing a purple top.
She later appeared in the suitcase video!

The woman in the purple made a mistake and left her purse on her desk advertising her business.

Her name is Ruby Freeman.


And she made the mistake of advertising her purse on her desk the same night she was involved in voter fraud on a MASSIVE SCALE.

Her T-shirt says “Lady Ruby” and her purse says, “LaRuby” which is her company.
This was not a very smart move.

It’s on her LinkedIn page!

Ruby was wearing a different shirt but had the same purse by her side.

Here’s another shot of Ruby and her purse.

Maybe the Georgia police or Bill Barr’s DOJ may want to pay Ruby Freeman a visit.

The ugly toad like creep did not expect Trump to lose and now he's trying to save his own ass from permanently acquiring slime ball status after turning the DOJ into Trump's private law firm.
“For evil to flourish, it only requires good men to do nothing.” Simon Wiesenthal
Top

Oh boy, the ones you don't like, you say are doing the bad things.
Top 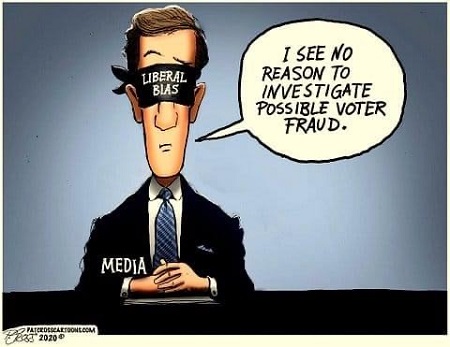 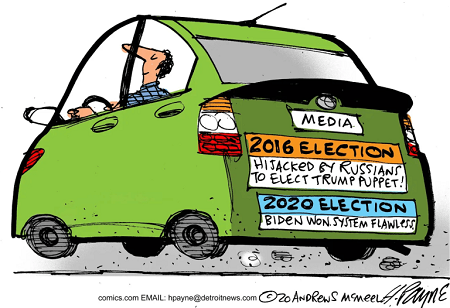 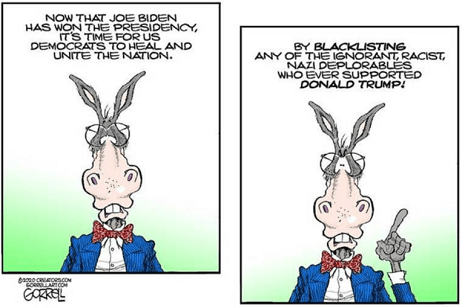 On the Mark Levin show founding Democracy Institute director Patrick Basham gave a remarkably lucid explanation for peculiarities surrounding the election. Rather than fraud allegations, he focused on traditional markers associated with an incumbent's almost inevitable victory that were all lined up to result in a massive Trump win.

Basham explains there are other metrics associated with elections that invariably predict elections. He's not talking about polls. Instead, he's talking about everything surrounding polls, such as red waves, geographic trends, and (although he doesn't mention it) even cookie sales.

The results are completely inconsistent with the data surrounding the election. To a logical person that Trump did not, in fact, win simply makes no sense. At bottom, if Biden were as popular as his victory indicates, wouldn't his support have been enormous in every state he won? Instead, he swept a few specific precincts.

It's simply inconceivable every non-polling metric predicted a huge Trump victory, only for Biden to win with a handful of states that had election anomalies never before seen in an American election — but often seen in a Venezuelan one. FULL STORY
There are none so asleep & oblivious to the real world as those who are & would be Woken.

I'm puzzled about the Wall Street Journal resigning itself and putting in columns saying "Surrender, Trump" like their imprint is our reality.
Top

With the Confederate Slave Holders Democrats, come with , Marxists, Chinese, Ayatollahs, George Soros(representing Nazis),owning most of the TV Networks, etc, and of course Ra, still in her Dream of Utopia, with all the above. I still have hope!

We do know the Chinese shipped ballots in to our election. And Money Talks Just ask, joe and Hunter.

Report: Chinese Spy Was in ‘Relationships’ with at Least Two Midwestern Mayors

A suspected Chinese spy was linked to at least two anonymous Midwestern mayors, according to a bombshell report from Axios.

Fang attended regional conferences for U.S. mayors, which allowed her to grow her network of politicians across the country.

She also engaged in sexual or romantic relationships with at least two mayors of Midwestern cities over a period of about three years, according to one U.S. intelligence official and one former elected official.

“At least two separate sexual interactions with elected officials, including one of these Midwestern mayors, were caught on FBI electronic surveillance of Fang, according to two intelligence officials,” Axios said.

The outlet said it was not able to identify or speak to the elected officials.