The Justice Department, in a letter to the House Judiciary Committee, says prosecutors will examine allegations that donations to the Clinton Foundation were tied to a 2010 Obama administration decision to allow a Russian nuclear agency to buy Uranium One, a company that owned access to uranium in the United States, and other issues.

The letter was a reply to formal requests from congressional Republicans for a Justice Department inquiry into various Clinton-related issues.

Although attorney general Jeff Sessions has recused himself from all matters related to the election, he and the deputy attorney general, Rod J. Rosenstein, will oversee the prosecutors’ decisions including "whether any matters merit a special counsel,” the letter said.

In a statement Nov. 3, President Trump said he was disappointed with Mr. Sessions, and that longstanding unproven allegations about the Clintons and the Obama administration should be investigated.

Mr. Trump has cited reports from conservative new outlets to aides and friends as examples for why a special counsel should be appointed.

In particular, Fox News host Jeanine Pirro — a friend of the President and whose show he rarely misses — told him a special counsel needed to be appointed, according to two people briefed on their Nov. 1 Oval Office meeting.

Through a Fox News spokeswoman, Jeanine Pirro said, “Everything I said to President Trump is exactly what I’ve vocalized on my show, ‘Justice with Jeanine.’”

Making scathing critiques on her show, Ms. Pirro — who had interviewed to be the deputy attorney general, according to three transition officials — has aggressively denounced Mr. Sessions as weak for not investigating the uranium deal.

Something's afoot Riddick. Thanks for that post too, but just before I turned the radio off after getting home early, again!

The newsman said AG Sessions is planning a full investigation over what you've posted above!

One day in the distant future that gal maybe compelled to write her sequall titled, 'What the Hell happened? part II' 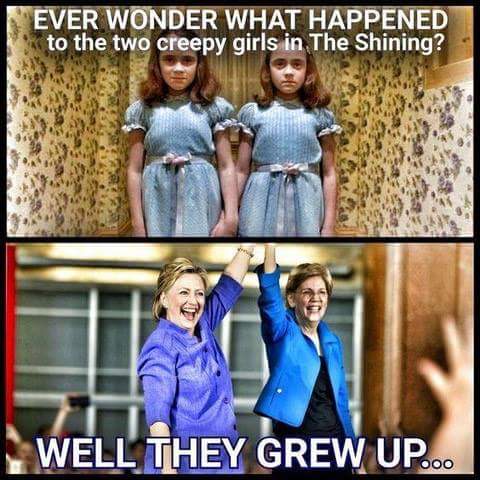 With 5 failed attempts to date, we hope his work is not needed a 6th time on this Teflon Donna!

Riddick, Many thanks for the compilation never seen the same way on MSM. Some we'd watched live and with some other taped incidents, we quickly changed the TV's channel.

For those who still haven’t come to terms with the 2016 election, now there is the Hillary Clinton Tree Topper!

And the legend goes on, or something like that. FULL STORY
Top

Wonder what she is doing in India, perhaps, trying to sell the Statue of Liberty or some such thing. Hitlerys Pity Party has gone global.

VIDEO: Hillary slips down stairs in India — despite two men holding her up
MARCH 12, 2018

Even though Hillary Clinton had help going down a set of stairs in India today, she still nearly fell down.

Despite both men helping her get to the bottom of the stairs, she slipped again, nearly doing the splits.

Huma stopped to watch as Clinton attempted to regain her balance.

Hillary kicked off her sandals to get to the bottom of the stairs.

No one seemed alarmed by the startling display.

Clinton was in the country promoting her book, “What Happened.” Yes, she’s still bitter about losing to President Trump.

Hillary Clinton suggested that people who supported President Trump in 2016 did so because they “didn’t like black people getting rights,” or women getting jobs, during a discussion at the India Today Conclave on Sunday.

“If you look at the map of the United States, there’s all that red in the middle where Trump won. I win the coasts, I win Illinois, I win Minnesota, places like that,” Clinton said.

“What the map doesn’t show you is that I won the places that represent two-thirds of America’s gross domestic product,” Clinton explained. “So I won the places that are optimistic, diverse, dynamic, moving forward. And his whole campaign, ‘Make America Great Again,’ was looking backwards.”

While visiting Jahaz Mahal in Dhar’s Mandu, Clinton was attempting to descend about 15 stairs.

He played clips from her speech in India too!

She can't face the fact that she lost and rightly so for the betterment of this nation.

I thank you for the short link where her loafer's slick, non hiking, soles did not jive with the uneven ancient limestone steps.

I just watched Riddick's video and it had me ROTFLMAO a second time!

Years ago we had a beloved local TV weather lady who was a well known heavy drinker. She NEVER showed one sign of being tipsy on the air. But her coughing fits came calling all to often live in front of her hand marked weather map!

Sore loser Hitlery's coughing spells and cursing spells made little difference to her plugged ears voters before the election!

Deep In Denial Hillary Doubles Down On Deplorables

“If you look at the map of the United States, there’s all that red in the middle where Trump won. I win the coasts, I win Illinois, I win Minnesota, places like that,” Clinton said.

Why not say "Fock Wisconsin, Michigan, Pennsylvania, places like that"? Clearly, it's what she's thinking. Nice message eh! No hashtag "Middle America Matters" for HER!

She bashed America's Heartland & lost the election. Now she's taking her bitter pill tour world wide? Wonder how that'll play out for Dem prospects in 2018 and 2020.

You Can Run But You Can't Hide From Hillary!

Playing the game to win Missouri Attorney General Josh Hawley, running in the GOP primary to take on Sen. Claire McCaskill, D-Mo., released this video tying his potential opponent to Hillary. Clinton's bitterness is the gift that keeps on giving!

Not too good! *After attempting to get back up again, she quickly became a single deplorable to the Democratic party. Hillary is President On Earth 2?

The Left wants Hillary to be President so bad, they've created an alternate reality for her.

Meanwhile, Back On Earth 1 HILLARY: Maxine Waters will save America from racism


“But despite it all, there are signs of hope and resilience. And much of that is being shaped and led by black women, like my dear friend Maxine Waters,” she said to applause.

Well, Doka! I can't begin to thank you enough for that video. So I won't really begin!