Ah! The Sweet Smell Of Diversity and Burning Buildings and Car Fires


Many Swedes were horrified in early 2017 when U.S. President Donald Trump linked immigration to rising crime in Sweden, but an increasing number now agree with him.

Amid soaring crime rates, gang violence, complaints about education, and pregnant mothers even being turned away from maternity wards due to a lack of capacity, resentment in Sweden has built over the influx of more than 600,000 immigrants over the past five years.

And tonight is one of the worst night for violence in recent history as police report multiple gangs of masked youths rampaging across three major Swedish cities, setting cars on fire in what seems like a coordinated action. 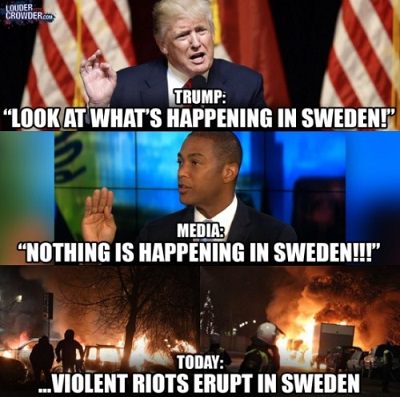 viewtopic.php?f=49&t=52124
There are none so asleep & oblivious to the real world as those who are & would be Woken.

Could be Mercury in Retro?

( supposed to be over soon

This is how confusing "Labels" can be! And those that depend on "Label Correctness" make themselves look pretty stupid. It is the lazy way of "Lumping ,""Painting With A Broad Brush" and missing out on some very important points. I am just as guilty as any body doing it, but I Am aware, I'm doing it, which certainly doesn't make it any better! My priorities are very clear, My Country, My way of Life, My family, what ever threatens one, threatens ALL. Simplicity over mass confusion, keeps me whole and some what rational . (Thinking)

Now, this term "Democratic Nationalist" (A Democrat who likes or loves their country), is a new term that keeps popping up , much to my delight. It means that some Democrats DO like where they live. Not a thing you see in our labled Democrat Congress. Now most of those folks are White and they are not going to stop Destroying, their Country, because their glass is half full and always lacking(They don't have All your money........YET). I am certainly not opposed to have these folks deported along with the rest of those who, wish to do harm to the Country, The lives of the citizens and other families just like mine. Don't try to cause harm, no matter what current color of skin you are wearing! (Skin Color subject to change, depending on Karma and other reasons)

"I'm Not A Racist, But I'm A Nationalist": Why Sweden Faces A Historic Election Upset

We noted earlier that Swedish politicians were quick to react with anti-immigrant party 'Sweden Democrats' seeing a surge in the polls ahead of the September 9th election.

“I’m not a racist, but I’m a nationalist,” Mathson said. “I don’t like seeing the town square full of Niqab-clad ladies and people fighting with each other.”

Is Sweden set to have its own political earthquake in September, where general elections could end a century of Social Democratic dominance and bring to power a little known (on the world stage), but the now hugely popular nationalist party often dubbed far-right and right-wing populist, called Sweden Democrats?

The news sometimes blows it badly since I'd not heard of Sweden's latest immigrant induced malady!


When the arsonist rioters see the sun coming up. Collectively they all realize they are tired and such hard work has worked up a huge appetite. While boarding the huge SCANIA bus for a free ride back to a No Go Zone. They are all smiles so happy to have a free home, free food, free money and to occupy their formerly free Socialist Democratic country named Sweden!

.......all wasteful, climate changing wars. Begun again by the Red Blooded Royals, or by a bewitching God-like dictator, or any so called religion, or for any other reasons like a world wide virus pandemic! MK II 4/26/15
Top
Post Reply
6 posts • Page 1 of 1