In 2016, two astronauts finished nearly a year of work on the International Space Station. NASA's Scott Kelly and Russia's Mikhail Kornienko were studied closely for changes in their physical and psychological health.

NASA touts the mission as part of its "Journey to Mars", in which it hopes to send humans to the Red Planet by the 2030s. But a recent paper published in the journal Space Policy argues that there are so many aspects to a Martian colony that it is all but impossible to simulate the parameters on Earth.

"We can not simulate the same physical and environmental conditions to reconstruct the Martian environment, I mean such traits like Martian microgravitation or radiation exposure," Konrad Szocik, a cognitive scientist at the University of Information Technology and Management in Rzeszow, Poland and lead author of the paper, said in an e-mail. "Consequently, we cannot predict physical and biological effects of humans living on Mars."

The rest of the story

Q: In short, what would it actually take to get to Mars by 2020? FULL STORY
Top

IT'S NO SMALL POTATOES
Engineering feats aside, we'll need creature comforts if we're ever going to survive in deep space. A home-cooked meal could be the difference between sanity and hysteria. FULL STORY
Top

What the hell are we fighting for? Ah, just surrender and it won't hurt at all. You just got time to say your prayers. Yeah, while you're waiting for the hammer to fall. (Brian May of Queen)
Top

It's What's For Dinner

Will there be Hamburger Helper? Sure thing!

No beef though. Only hamburger substitute -

Some IKEA Engineers Are Pretending To Live On Mars At face value, it sounds delightfully goofy—and totally useless: Swedish furniture company IKEA, known for creating impossibly cheap (and often incredibly chic) flat-pack furniture, has sent several of its engineers to live in a Mars simulation. Yes, the brave men and women who designed your beloved EKTORP sofa and GJÖRA bed frame are hanging out at the Mars Desert Research Station in Utah, playing at space colonization.

But the exercise, which IKEA announced this week at its annual Democratic Design Day event in Älmhult, isn't just about helping NASA create cozier space habitats—though WIRED reports that the team is hopeful they'll be able to come up with some interesting ideas in collaboration with Lund University, which in turn does work with NASA.

The primary goal is actually to use the extreme conditions of a Mars simulation—impersonal design, cramped quarters, space toilets—to come up with design solutions that will work even better on Earth. FULL STORY
Top

If We Built A City On Mars, What Should We Call It?

Scientists using NASA's Mars Reconnaissance Orbiter spacecraft have made a surprising discovery: an ancient dried-up lake bed that once held 10 times as much water as all of the Great Lakes combined. There's a possibility this location saw the evolution of life billions of years ago, and may offer clues as to how life arose on our own planet. FULL STORY
Top

For their next "story" they are doing "Goldilocks and the 7 Dwarfs".

Don't you mean "Snow White and the Three Stooges"? 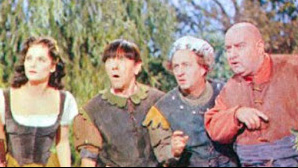 
Desperate People love to compare "Apples and Oranges" so they give people an orange , then tell them it is an apple.