Video/ you may have a problem getting to this, well worth a try

2020 Election Investigation: Who Is Stealing America?

Try this for the above, it is a must see.

Something Historic Happened With America's Electors On Monday

Monday was the day when the states designated their electors to cast the states’ votes for president. By day’s end, creepy, confused Joe Biden had 306 electoral votes. Democrats are ecstatic, believing that they now have a signed, sealed, and delivered White House. They don’t.

The Supreme Court currently appears to be a craven institution. Many think the Court is sending a message saying that, if Democrat Senate candidates win in Georgia, giving both the White House and Congress to the Democrats, it will rubber-stamp everything the Democrats do. In this way, the justices hope to prevent court-packing that will diminish their prestige and cachet. Still, we might yet be surprised.

Additionally, more evidence keeps emerging about massive fraud. The audit of the Antrim Dominion machines shows that they were programmed for fraud and almost certainly used as programmed. There are also affidavits signed under penalty of perjury from eyewitnesses and expert witnesses across America about fraud and the indicia of fraud. There's the infamous video from Georgia (and there may be more videos emerging, although that's hopeful guessing on my part).

And there's the redoubtable Sidney Powell, who says she has documentary evidence that votes were sent overseas and manipulated there. This, she says, could trigger Trump's 2018 executive order imposing sanctions if there was foreign interference in an election. At the time, that E.O. appeared to be a response to the Russia collusion hoax, but Trump may have been looking ahead, not backward.

The Director of National Intelligence, John Ratcliffe, will be issuing his report on December 18. If there really is provable massive fraud or foreign interference, the election cannot stand.

To prepare for these possibilities — either judicial courage or such overwhelming fraud that the election cannot stand — seven states did something unusual and courageous. Pennsylvania, Georgia, Michigan, Wisconsin, Arizona, Nevada, and New Mexico all selected two slates of electors: one slate accepts a Democrat victory, but the other slate anticipates a turnaround, whether judicial or because of such overwhelming proof of fraud or foreign interference that Biden's "victory" must fail.

Academics have sketched out several scenarios. Under one, Pence as president of the Senate could throw out both sets of a state’s electors. Another contemplates that the House of Representatives would end up choosing between Biden and Trump. [This scenario would give one vote to each state and since the Republicans have more states with Republican majorities, President Trump would likely be the winner]. There is even a scenario in which the Speaker of the House, currently Democrat Nancy Pelosi, could become acting president.

Sir Austen Chamberlain, speaking in Birmingham, gave voice to an apparently nonexistent old Chinese curse. Chinese or not, it seems pertinent to the election we're facing: "May you live in interesting times." Let us hope the entire weight of the curse falls on the cheaters, not the cheated.
There are none so asleep & oblivious to the real world as those who are & would be Woken.

I can only hope this can be verified, China Joes, direct pipe-line to China, Russia, Iran, Cuba, etc. Is Alarming even to Democraps. Mmmm, do I detect some fresh air ?

The Pentagon discontinued briefings with the Biden Transition Team on Friday morning.

Behind the scenes: A top Biden official was unaware of the directive. Administration officials left open the possibility cooperation would resume after a holiday pause. The officials were unsure what prompted Miller’s action, or whether President Trump approved.

Riddick, maybe you can put this up, so it is easier, for the people to see? Thank You.
KARMA RULES
Top

Here is the entire interview from where Joe's little nugget came from.

Your Wish Is My Command

Riddick, maybe you can put this up, so it is easier, for the people to see? Thank You.

Is The President Channeling Sun Tzu?

As of yet, there has been no storm, no Kraken. Trump has followed the Constitution, making legal arguments up to and including the U.S. Supreme Court. What Vice President Pence does when it is time to again follow the Constitution and certify the Electoral College votes is to be determined.

Will a massive declassification of criminal and seditious activities subdue the Democrats? Will Trump win without a bloody battle? Time will tell.

At this point, it’s a binary choice. Either Trump is in over his head and will be dragged out of office. Or he is executing his plan, on his terms and timing, as he has done since his famous escalator ride at Trump Tower in 2015.

Trump knows the stakes for himself, his family, and America if Kamala Harris and Joe Biden get the keys to the kingdom and promptly hand them over to China. Want to bet against Trump? How has that worked out in the past?

Mystify, mislead, and surprise the enemy.

He will win who, prepared himself, waits to take the enemy unprepared.

Is Trump unprepared? Au contraire. Listen to Oprah interviewing him in 1988, more than thirty years ago. He looks younger but sounds the same as he does now, speaking of China, immigration, and electoral politics. Trump has been preparing for this moment most of his adult life.

Buckle up for an interesting few weeks ahead.

FULL ARTICLE
There are none so asleep & oblivious to the real world as those who are & would be Woken.


THE MAN WHO WILL SAVE AMERICA… “This Isn’t the Beating of a Drum, This Is the Burning of a City!” – Inventor Jovan Pulitzer DESTROYS Georgia’s Corrupted 2020 Election Results

Anyone ever notice how Biden supporters never post anything Pro Biden... It's just all Anti-Trump...
KARMA RULES
Top

Anyone ever notice how Biden supporters never post anything Pro Biden... It's just all Anti-Trump...

Probably because the vote for Biden wasn't actually a vote for Biden but a means to rid the world of the scum known as Donald J. Trump.
“For evil to flourish, it only requires good men to do nothing.” Simon Wiesenthal
Top

Anyone ever notice how Biden supporters never post anything Pro Biden... It's just all Anti-Trump...

Ah Shucks Ra, Bless your little black, hate filled heart! The only thing I can say about you, is that you are consistant. That's the thing about the Human Race, they can be saved from many things, But , Never From Themselves.
KARMA RULES
Top

That's 'cause self-reflection is optional. Why complicate things? Individual thought? Nah. Forget logic & reason. Follow the herd. Save wear & tear on your brain. And never ever change. 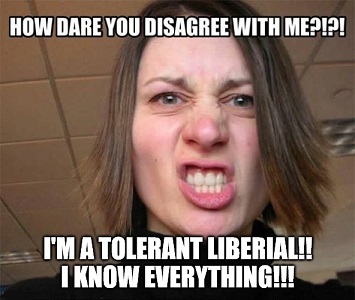 Life is simple when you know you're right all of the time.
There are none so asleep & oblivious to the real world as those who are & would be Woken.

Hey Folks, Something is going down, the babel is getting really heavy. Between now and the 6th, put your feet up and get a good book, unless of course you are going to DC, my blessings go with them. Hard to disipher rumor/reality. We Will know for sure in a few days. I'M Going to rest up for a day or two, unless something pops up, I just Can't ignore. Bless us All!
KARMA RULES
Top
Post Reply
137 posts