by Riddick
The Trump administration said Monday it was ending funding to the United Nations Population Fund (UNFPA), long a target of conservatives over concerns that its work in China abets the communist authorities’ controversial population limitation programs.

The administration’s first confirmed cut to a U.N. agency will cost the UNFPA $32.5 million.

Its budget proposal for fiscal year 2018 calls for unspecified reductions to contributions to the U.N. budget, and further “seeks to reduce or end direct funding for international organizations whose missions do not substantially advance U.S. foreign policy interests, are duplicative, or are not well-managed.”

The move comes as a follow up to President Trump’s decision, three days after his inauguration, to restore Reagan-era policy that denies federal funding to abortion-supporting or promoting groups.

The State Department said the determination to cut UNFPA funding “was made based on the fact that China’s family planning policies still involve the use of coercive abortion and involuntary sterilization, and UNFPA partners on family planning activities with the Chinese government agency responsible for these coercive policies.”

by Riddick
President Donald Trump has decided to donate his first quarter salary to the National Park Service, the White House announced on Monday.

“The president has spoken to counsel and made the decision to donate his first quarter salary in total to a government entity, and he has chosen this quarter to donate it to the National Park Service,” White House Press Secretary Sean Spicer said.

“The Park Service has cared for our parks since 1916, and the president is personally proud to contribute the first quarter of his salary to the important mission of the Park Service, which is preserving our country’s national security, so it is my pleasure on behalf of the United States to present a check for $78,333 to the secretary of the Interior Ryan Zinke and Superintendent of the Harper’s Ferry Park Site Superintendent Brandyburg,” Spicer said.

The money will go specifically towards the infrastructure of the nation’s battlefields, according to Interior Secretary Ryan Zinke, who attended the briefing.

”As a veteran myself, I am thrilled at the president’s decision to donate the check he did today. I did talk to the president last night, and he has decided as you know to donate his entire quarter of salary, and we’re going to dedicate it and put it against the infrastructure of on nation’s battlefields,” Zinke said.

“We’re about $100 or 229 million behind in deferred maintenance on our battlefields alone, and that’s on our 25 national battlefields and we’re excited about that opportunity,” he said.

by Malaria_Kidd II
Thanks for the up dates Riddick.

If every American would send in a dollar to the park service just to maintain the 25 battlefields that are in "the red" the administrators would be in tall cotton!

Well, I don’t really have to do any holding together, now that I figured out what Trump is up to. He is shaking things out, but counting on Trump gravity to pull things back together as he moves along.

He is moving “forward” at speeds Obama could not even dream of.

You and I will be anti-Trump trolls one day and MAGA heroes the next. Get used to it. Trump speed is the new normal. Some will call it flip-flopping, but that’s not what it is. Trump is dodging and weaving through reality faster than the reality can react to disrupt his plans.

I was explaining this to my wife. This is a roller-coaster now. Trump is no longer waiting for people to keep up. He is taking his bewildering art-of-the-deal campaign schtick into geopolitics, and for a lot of people who can’t keep up or hold on, it will be a rough ride.

Trump is no longer playing only with evil and cunning players who are still predictable, easily beatable dopes, like Hillary. He is playing against killers, with his own team of killers, and all the while he has scheming creeps like Hillary, BGI, SPLC, and the neocons gunning for him. Snake Ryan ready to bite when nobody is looking. “Warhead” McCain screaming for Russian blood. Psycho Kim and Samoa Obama plotting some kind of intrigue to take him down. And THOSE are the lightweights.

This is the majors now. Trump has to outwit world-class adversaries and “frenemies” by defining the deals that they will agree to. One minute they will think Trump is their friend – the next minute, a cunning, bitter foe.

And he has to do this with evil cheerleaders like Warhead, Linderace, Dipsy Dowd, Maggie Haterman, and Fake Yapper trashing him or praising him alternately, no matter which way he goes. They can’t keep up, either.

Neither can many around him. I think that half of the problem with advisers crashing into each other is they don’t realize what Trump is doing.

And people will trash you, and they will trash me. Get used to it. I’ve already caught plenty of people mocking me. Well, just wait a week in Trump time. Look stupid and conned by Trump one minute, and you look like a sage three days later.

Trump will not find perfect solutions. He will find OPTIMAL solutions. We cannot ask for more. Trump has stood by and watched Perfect murder Good for 8 years – maybe longer. He’s not gonna do it. He’s going to deliver the best outcome possible, and he’s not waiting for us to feel relaxed about it.

Best presidency ever! Just hang on. More winning is coming, but a lot of people are going to scream that it’s all over at EVERY turn.

The best way through this is to define viewpoints, not people, because people will shift as they change position and velocity in Trump gravity. Bash the neocon, warmonger, and dopey globalist positions – not the people who are going to hold them one moment and come loose from them later.

Trump is Jupiter moving through the asteroid belt. He is going to pull people into his orbit. A few will get slung off into space, but most will come along for the ride of their lives.

I am ON the Trump Train for good, even if I scream that I want off and can’t take it.

In the end, I only want to scream “TOO MUCH WINNING!!!

by Malaria_Kidd II
I liked his lines a lot Doka.

Yeah, help is on it's way so don't stand in his way!

Your link failed to take me there.

Should I or shouldn't I Tweet out your link to @theRealDonaldTrump or @POTUS? That is your question for the night.

by Doka
Ummm. Let's see if this works

Thanks! It worked OK Doka to a great pro Trump article but don't tell that to the sore losers with the deadly skate board in their hands!

I see four years ahead with the ever present skate boards becoming even more popular as a protester's weapon of choice. 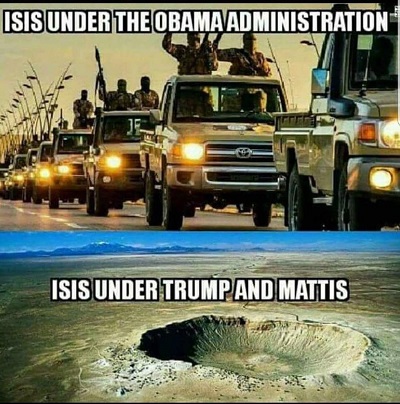 by Riddick
President Trump will sign a double-barreled executive order Tuesday that will clamp down on guest worker visas and require agencies to buy more goods and services from U.S. companies and workers.

Trump will sign the so-called "Buy American, Hire American" executive order during a visit to Snap-On Tools in Kenosha, Wis., Tuesday, said two senior administration officials who briefed reporters on the order Monday. The officials spoke on condition they not be identified because the cabinet-level officials who could discuss the matter on the record were unavailable.

By combining aspects of immigration policy with federal procurement regulations, Trump is using executive action to advance his philosophy of economic nationalism without waiting for action from Congress. But like many of his previous executive orders, the order will largely call on cabinet secretaries to fill in the details with reports and recommendations about what the administration can legally do.

by Cherry Kelly
..and to hear the DEM controlled media - you would think nothing has been accomplished at all...

Just this last week we learned that the majority of all the protestors are paid by - ya Soros and yes even Clinton people. Free speech is one thing, but the protestors are not just marching but damaging, attacking others physically, and yes causing millions of dollars of damages to stores that have Trump signs or Trump supporters.

THIS has to stop! Now they wear masks so you cannot see their faces. SO get some out there to pull off masks and take pictures... spread pictures of these people all over the place. Find out where they bank and see how much 'strange monies' are going into their accounts. Its a thought anyway.

by Riddick
At a rally with supporters on Saturday, Trump said he would make a “big decision” on Paris within the next two weeks and vowed to end “a broken system of global plunder at American expense.”

Administration advisers on both sides of the political spectrum emphasized the president himself would decide what path to pursue when it came to the climate agreement.

“In the end, President Trump will make the final decision, regardless of where the staff conversations end up,” Thomas J. Pyle, who heads the conservative Institute for Energy Research and led the Trump transition team for the Energy Department, said in an email.

“The environmental lobby is going to cause litigation problems on nearly every aspect of President Trump’s energy and environmental agenda whether or not the administration stays in the Paris agreement. Staying in Paris only gives them another target to shoot at.”

There's No Pleasing Some People 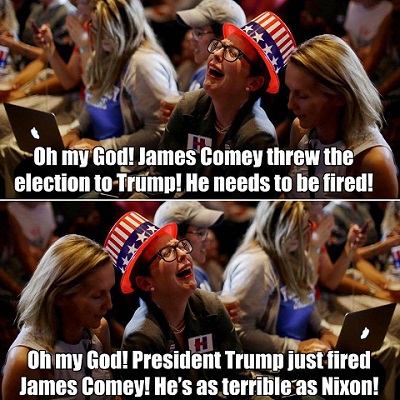 Re: Comey's downfall was not because "Tear up Texas" was Tweeted to terrorists in Phoenix!

by Malaria_Kidd II
But being top dog at the FBI he was bound to hear "Tear up Texas" again somewhere in time!

Re: Trump In Action in Arabia!

Saying these three words repeatedly, "Drive them out!" was not so soft spoken in regards to terrorists and terrorism

Could it be a reality that ONLY our 45th U.S. President from a modern times New York City would say this in a speech in a Muslim country?