Caught in the Lie

Cherry Kelly wrote: voguy -- like many who are already retired - trying to figure out how to put aside the thousands required for property taxes (that keep going up) and house insurances, car insurances, etc. let alone food, utilities, etc.

AND the few who have IRAs or stocks - who get charged taxes on monies already taxed when they bought into some of the IRAs, etc. See you could only deduct K from being taxed, but a lot of people put in more than that K - in hopes of building up a nest-egg for retirement. Yet when year ends sent out and if they receive more than 2K yr - oh its taxed. (Could add that interest each year already included in yearly Part B interests on tax schedules -- now must pay taxes on already taxed monies!)

In my chronically economically-depressed hometown, there has been a flight out of the city for decades now. What is left is a mix of retired textile mill workers - many first or second generation immigrants or their kids who are now retired, the poor and those who are young, with some college education, but not well-off enough to move out into a better environment.

Due to a confluence of financial disasters such as the loss of businesses, poor budgeting for infrastructure and the deliberate importation of other regions (such as Boston, New York's/ New Jersey's and Philadelphia's) unemployed poor, the city's tax base has shrunk but obligations has risen.

So, this week the city saw ANOTHER rate increase for water n top of previous-year's "temporary" rate increases for rainfall run-off.

So, as with many cities and towns, we have a city run by an entrenched bureaucracy with the first goal of keeping themselves employed. They do this by raising taxes and fees wherever and however they can. An example of this was in a segment I heard driving home on the local radio station. A caller called-in asking the guests where he could find this guy's mobile dining truck. I guess he makes excellent clamcakes and is kind of a local legend. The guess said that the caller would never find it in the city because it just costs too much in fees for him to operate his business.

And, this is happening all over the place. Our government is not about "service" anymore as much as it's about government workers staying employed.
Top

RETIRES? Probably on full pay and million or 2 bonus for a job well done. What a joke.

...and more and more stories coming out from ordinary people and how ObamaCare costs - triple or almost triple monthly insurance rates....along with higher deductibles. These are working people.

AND - doctors (hospitals too) who have no idea what is supposed to happen Oct1 or beyond because they have not received any information -- yet.

SO how is it - insurance companies KNOW - but dr's and hospitals don't know?
Top

Everyone one of us should write to our reps and demand;

a). that they enroll in Obamacare like we have to. or,

b). they give anyone requesting an exemption an exemption with no questions asked.
"I predict future happiness for Americans if they can prevent the government from wasting the labors of the people under the pretense of taking care of them." - Thomas Jefferson
Top

The worm has turned

voguy wrote: Everyone one of us should write to our reps and demand;

a). that they enroll in Obamacare like we have to. or,

Put in a prison cell, but one time he could-a been The champion of the world.
Top

AND AGAIN REID rejects the House BILL -- which got rid of medical device tax, and put obama care back ONE YR. GEE Obama had delayed some things for ONE YEAR - for EMPLOYERS - but DEMS refuse to delay for one year the stuff for EMPLEEEEES --

IT IS LONG PAS TIME FOR THE DEMS take responsibility for any gov't shutdown..

After all the DEMS never even passed a budget when they controlled both House and Senate - just - did zip in that.
Top

The Trump administration said Friday it won't charge a key IRS figure in the mistreatment of conservative political groups during the 2010 and 2012 elections.

In a letter to members of Congress, the Justice Department said that "reopening the criminal investigation would not be appropriate based on the available evidence."

Republican leaders on the House Ways and Means Committee had hoped the Justice Department would reopen its case against ex-IRS official Lois Lerner now that Republican Donald Trump is in the White House and Attorney General Jeff Sessions runs the department.

They were disappointed in the department's response. "This is a terrible decision," said Rep. Kevin Brady, R-Texas, the Ways and Means Committee chairman. "It sends the message that the same legal, ethical, and constitutional standards we all live by do not apply to Washington political appointees."

Last week the Department of Justice, led by Attorney General Jeff Sessions, announced prosecutors will not pursue charges against former IRS official Lois Lerner. Lerner is infamous for her deliberate targeting of conservative tea party groups between 2010 and 2012 while leading the tax exempt department inside the agency.

The news was immediately met with outrage by House Ways and Means Chairman Kevin Brady, who said the failure to reopen the case against Lerner (which was closed without charges under the Obama administration) only proves that Washington bureaucrats are held to a much lower standard than every day Americans living outside the protective D.C. bubble.

Further Judicial Watch, which is still pursuing documents related to the IRS targeting scandal and has for years, proving Lerner was at the heart of the targeting, is buying none of it and calling on President Trump to intervene.

"I have zero confidence that the Justice Department did an adequate review of the IRS scandal. In fact, we’re still fighting the Justice Department and the IRS for records about this very scandal. Today’s [Friday's] decision comes as no surprise considering that the FBI collaborated with the IRS and is unlikely to investigate or prosecute itself," Judicial Watch President Tom Fitton released in a statement. "President Trump should order a complete review of the whole issue. Meanwhile, we await accountability for IRS Commissioner Koskinen, who still serves and should be drummed out of office."

Re: Caught in the Lie 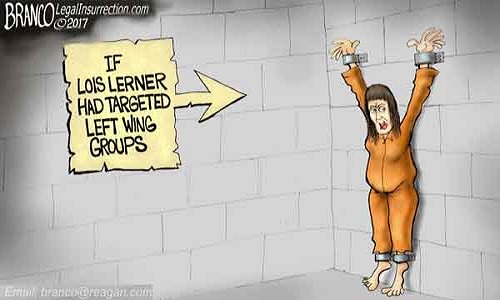